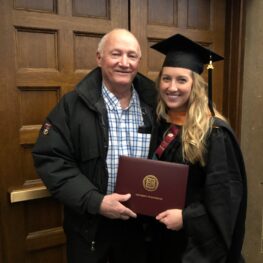 It was three in the morning when Bob K. woke from a strange dream. He left the bedroom to lie on the couch when something didn’t feel quite right.

“I had no strength in my left side, my face was drooping, and I was slurring my words,” he shares.

Fortunately, Bob’s son recognized these symptoms of stroke and called 9-1-1 where he was taken by ambulance to the closest hospital.

After his release from the hospital and 25 days in rehabilitation, Bob was referred by his Primary Care Physician to Dr. Scott Berman, Vascular Surgeon. It was discovered that his carotid artery, the vessel that brings blood to your brain, face and neck, was nearly 80 percent blocked.

Blocked carotid arteries are a significant cause of stroke.  The blockages usually occur from atherosclerosis which is caused by many factors including smoking, elevated cholesterol, high blood pressure, diabetes and genetics.  If the blocked carotid artery is not corrected, the chance of having another stroke is likely.

This manner of stent insertion to open blocked carotid arteries is done through a small incision just above the collar bone and has been shown to be very safe and effective.

“The main reason to fix a blocked carotid artery is to minimize the chance of the patient having a stroke.  This can be accomplished with either surgery to clean out the plaque or placement of a stent.  Both procedures can be done with very low risk of major complications and reduces the risk of another stroke,” says Dr. Berman.

Once an avid golfer and gym-goer, Bob is adapting to a body that moves at a slower pace after his stroke. But now, with improved blood flow, he actively participates in his physical therapy exercises and is working towards the goal of becoming fully independent once again.

Bob recommends that people remain aware of their risk factors for stroke.

Since his surgery, he has committed to lifestyle modifications recommended by his doctors and has lost more than 25 pounds. He no longer drinks or smokes. He urges others to be mindful of changes in their bodies and to ask questions with their medical providers.