Mike with his two sons (David and Joe) and wife (Diana).

Shortly after the death of his father, Mike Graziano (age 52 at the time) was about to embark on a much-anticipated family road trip to Arizona.

He experienced symptoms of a cough and fatigue. He decided to go to a local urgent care in Texas to be examined where he was diagnosed with pneumonia and given a prescription.

During the road trip, Mike still felt unwell. He suffered from a persistent cough, swollen ankles, and terrible sleep. As a former U.S. Marine Corps Officer, Mike was not one to complain. He pushed on and explored various landmarks in Arizona with his family. It wasn’t until he traveled to Rio Rico, Arizona that his symptoms warranted another trip to urgent care.

“I was called into an examination room where a nurse asked about my symptoms. She put the stethoscope to my chest.” The provider noted a heart murmur. “I immediately saw her expression change,” he shares. He was quickly escorted for an EKG and then rushed by ambulance to the hospital.

Mike was then transferred to Northwest Medical Center where he endured a series of tests to determine what was happening with his heart. The results: a failing mitral valve.

“The mitral valve is responsible for preventing the backward flow of blood into the lungs, which one can drown from. What Mike was experiencing was a severe and sudden leak in this valve. He was suffocating and drowning in his own blood,” says Dr. Bose, the cardiothoracic surgeon who operated on Mike’s heart.

“Staff at the hospital told me that when they see people with a valve like mine, they are usually dead,” Mike says.

The emergent procedure that Dr. Bose performed replaced the mitral valve and repaired his tricuspid valve.

Recovery post-surgery was a slow and difficult process. For a few months, Mike was forced to adjust to a slower pace and to accept the care and help of others. He dedicated himself to his cardiac rehab routine. It was with the team of caregivers paired with the love and support from friends and family, that he healed and regained his strength. It took 6 months to completely recover and now, Mike has no physical restrictions at all. 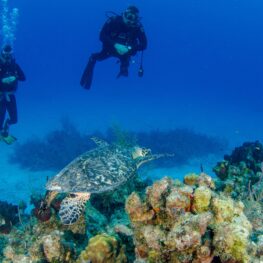 Mike on a dive in the Cayman Islands.

Recovering from his failing mitral valve has been both a life lesson and a gift. “I now know the importance of recognizing symptoms and listening to your body. To go to the doctor as soon as you sense them,” he shares.

“I have nothing but the utmost respect for Dr. Bose and everyone on the team,” shares Mike. “I will never forget the dedication of Dr. Bose.”

“I am deeply grateful to Dr. Bose and all the medical professionals that provided me a second chance at life. Being with my wife and seeing my boys grow to be young men is the greatest gift ever.”