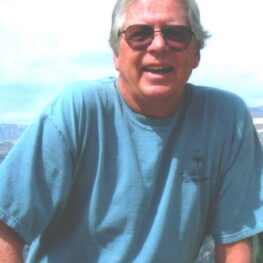 Steve Solomon, 68, was swimming with friends when he mentioned the discomfort he felt in his lower abdomen.

That discomfort shifted from mild to severe the following day. Steve went to the emergency room at Northwest Hospital where he received a CT scan. While he waited for his results, the pain escalated to a point that was so severe, he lost consciousness.

“I have never felt anything like it,” shares Steve.

Dr. Scott Berman, the vascular surgeon on call, walked out of a full clinic and rushed to the hospital to perform emergency surgery. Steve was suffering from a ruptured aneurysm. He had already lost a lot of blood and there was only time for local anesthesia. In between breaths, while Steve held as still as he could, Dr. Berman stented the ruptured aneurysm that was causing massive blood loss.

“This was a very unique case in that all the other vascular surgeons at Northwest Hospital were already tied up in surgery and using the special room that would typically be used for these types of cases,” says Dr. Berman. This meant that Dr. Berman was to work with a team, technology, and equipment not typical for aneurysms.

Dr. Berman praises the teamwork that took place to care for Steve.

“We were lucky to have an anesthesiologist and operating room staff who were all willing to step out of their comfort zones and not delay Steve’s care. Any further delay would likely have cost Steve his life.”

Steve’s aneurysm was 10 and a half centimeters. Normally, these are discovered at half that size.

Aneurysms are balloon-like bulges of an artery wall. As they grow, they can put pressure on organs in your body and can rupture, as Steve’s did. This can be fatal. The cause of these types of aneurysms is not widely known, though you are at increased risk for abdominal aneurysms if you are male, smoke, have high blood pressure, and are over the age of 65.

Dr. Berman shares that instead of a week or so in the intensive care unit and months of recovery from older techniques, even patients with ruptured aneurysms, when treated with modern endovascular repair can often leave the hospital in just a few days and can be fully recovered in a week or two.

It has now been a few months since his surgery, and Steve is working to regain his strength. He lifts weights and practices golf and hopes to return to the stamina he had before his emergency.

“This allows us to not only save a patient’s life but to do so with minimally invasive treatment techniques such as the aortic stent grafting used in Steve’s condition,” says Dr. Berman.

*Screening for aortic aneurysms along with carotid artery disease and peripheral arterial disease (PAD) are available at Pima Heart and Vascular and can be scheduled by calling (520) 838-3540.

*Insurance may cover an abdominal aortic screening ultrasound once if you’re at risk. You’re considered at risk by Medicare if you have a family history of abdominal aortic aneurysms, or you’re a man age 65-75 and have smoked at least 100 cigarettes in your lifetime.