Tucson Medical Center celebrates a significant milestone of Dr. Darren Peress, a cardiologist and clinical cardiac electrophysiologist at Pima Heart & Vascular, for successfully treating more than 1,500 patients who were challenged by an irregular heartbeat with the help of robotics for cardiac ablation. 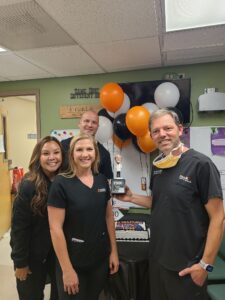 Dr. Peress is the leading provider of robotic cardiac ablation in Arizona, having performed the most procedures using this technology, and is among the top 10 in the world.

Tucson Medical Center is among 100 hospitals around the world offering Stereotaxis Robotic Magnetic Navigation technology for the treatment of cardiac arrhythmias. Electrophysiologists use the technology to repair misbehaving electrical circuits of the heart, called arrhythmias, with robotically assisted cardiac ablation. Dr. Peress and the electrophysiology team at Tucson Medical Center became pioneers of robotic ablation, performing their first procedure with Stereotaxis technology in 2009. Since then, they have treated a broad range of patients with robotics, many of whom would otherwise be unsuitable for traditional treatment methods.

Stereotaxis’ Robotic Magnetic Navigation technology introduces the benefits of robotic precision and safety to cardiac ablation, a common minimally invasive procedure to treat arrhythmias. Tens of millions of individuals worldwide suffer from arrhythmias – abnormal heart rhythms that result when the heart beats too quickly, too slowly, or with an irregular pattern. When left untreated, arrhythmias may significantly increase the risk of stroke, heart failure, and sudden cardiac arrest.