Bob N. was drinking coffee, reading the paper and listening to the news in late February when he felt a sudden “pop” behind his left eye. His left-sided vision was gone, though only for a few minutes. 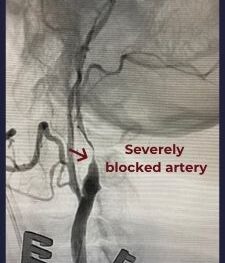 Bob didn’t find the situation urgent and scheduled an appointment with his eye doctor. Upon evaluation, his doctor quickly concluded that Bob’s symptoms were a result of amaurosis fugax, a painless condition where a lack of blood flow causes vision loss. What Bob didn’t know is that this is a silent indicator of a stroke.

Bob was known to have a mild block in his neck from a few years ago. We repeated an ultrasound scan and given its location high up in the neck, we were unable to get clear pictures but there was clearly worsening of the blockage in the neck artery,” he said.

That same day, Bob was then seen by Dr. Scott Berman, a vascular surgeon.

Patients who have a stroke or transient ischemic attack (TIA, or mini-stroke) due to carotid artery blockage are at very high risk of having another stroke if the blockage is not treated.

“Most blockages in the carotid artery that cause strokes occur in the neck between the collar bone and the jaw, where the artery splits into two branches.  One branch, the external carotid supplies the face.  The other branch, the internal carotid artery supplies the brain.  Bob’s split point was located very high in the neck under his jaw which makes the traditional surgery, carotid endarterectomy, extremely difficult,” says Dr. Berman.

Dr. Berman treated Bob by inserting a stent to open the blocked carotid artery using the Transcarotid Artery Revascularization (TCAR) technique.  This manner of inserting stents to open blocked carotid arteries is done through a small incision just above the collar bone and has been shown to be very safe and effective particularly in patients at high risk. 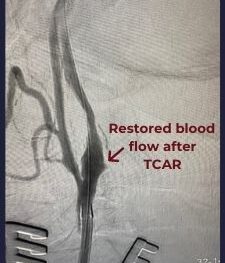 “Dr. Berman is world-class. Good at what he does, is easy to talk to and knows his stuff,” shares Bob.

“I am not the easiest patient,” says Bob as he hints to his stubbornness. But the advice of his doctors has impacted his lifestyle. He stays on top of his medications and heeds their advice.

Bob wants the community to be mindful of the other symptoms of a stroke.

“We all know the common stroke symptoms, but for me it was vision loss. It is important to note strange changes in your body and talk with your doctor,” he says.

Bob is recovering well and spends his time staying active.